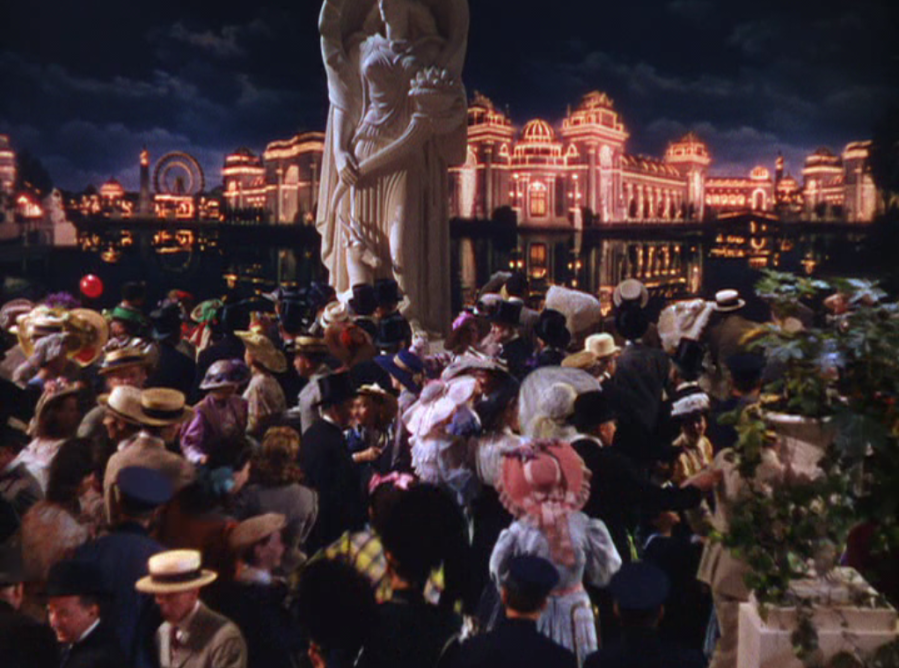 Meet Me in St. Louis is not my musical cup of tea. It belongs to that old-fashioned, basically extinct form of movie musical in which the songs exist as ditties to hum while leaving the theater and as future sheet music, not as vehicles to move the plot or expand character. And as a musical, I’m not sure I love it all that much. There’s some perfectly adequate dancing, and of course Judy Garland sounds just wonderful when she sings, but that’s not what captures me in the movie. Meet Me in St. Louis has deft control over its story, which sounds like a basic qualification but is actually impressive when one considers the movie is episodic and needs to leave plenty of time for Judy Garland to sing about trolleys. It has its eye very clearly on its frame – the World’s Fair of 1904 – as well as its emotional center. The Smith family is always present; the house is always in focus at the beginning of a new volume of stories, surrounded with family album pages at the change of each season, each one coming to life and propelling the story forward. It’s not a fascinating family, but the view is consistent, and eventually we are Stockholm Syndromed into believing in them.

The main character of the film is Esther (Garland), a seventeen-year-old whose sole purpose in life is to seduce the unsuspecting boy next door, John Truett (Tom Drake). Esther is hopelessly wholesome, and she knows it. At one point she confides to her sister, Rose (Bremer), that she wishes some of the bloom had come off her. Her flirtation techniques with John are comically inadequate; her plan to get John to kiss her is to keep him around after a party and help her turn off lights, a futile effort which has probably inspired a thousand eleven-year-olds to Ozymandian grandiosity in the gloaming. One wishes for a little more humanity in Esther, who has no real personality. She is either consumed with John, she is consumed with family matters, or she is singing a song: “The Boy Next Door,” “The Trolley Song,” and a slightly more morbid version of “Have Yourself a Merry Little Christmas” than the one you’re familiar with.

This is going to be a long aside even for me, but I can’t resist. Remember that episode of Arrested Development where Tobias sings “New York, New York” at the Queen Mary and Lucille Two sighs something along the lines of “Everyone thinks he’s Frank Sinatra,” which of course is funny because Liza Minnelli originated “New York, New York” before Frank Sinatra got a hold of it? “Have Yourself a Merry Little Christmas” was first made for Meet Me in St. Louis, which isn’t something I’ve known very long, and thus was first sung by Liza’s mother in the movie directed by her father. Of course, Sinatra turned that into another one of his standards. All I’m really trying to say is that Frank Sinatra was a cannibal. I wished for a little more personhood in Esther throughout the movie, although I’m not sure there are many characters who manage to outdo her on that front. Rose and Mrs. Smith (Mary Astor) are mostly bland, although the former is sometimes interesting because she’s at least as much of a virgin as Esther despite her best efforts. The first vignette of the movie involves her family’s attempt to give her room to receive a long-distance phone call which Esther is sure will end in a proposal of marriage, but does not come anywhere close to it. Mrs. Smith has a particularly noteworthy meltdown when her husband (Ames) tells her that they’re going to move to New York. (“Start spreading the news,” indeed. I’m sorry. I’ll stop.) Lon, Jr. (Henry H. Daniels, Jr.) is about as milquetoast as his older sisters, but he at least has the gumption to teach his little sister a catchy tune called “I Was Drunk Last Night.” Lon, Jr. is not any more interesting than John, if we’re honest; John is an athlete who we never see doing anything more athletic than catching up to a moving trolley. His interest in Esther is spoken more than shown, and one hopes that she discovers something new and interesting in her beau. If not, she might just die of boredom by the time the Great Depression hits. Grandpa (Harry Davenport) is not given much opportunity to be a person until the end of the film, but he comes through with flying colors once he gets the chance. Davenport, who is Dr. Meade from Gone with the Wind for most of us, gets to play much the same kind of man. Grandpa is a kind, wise old gent who also happens to have an acerbic wit. He catches Esther trying to give a dance card full of terrible partners to a girl who appears to be competing for the same man as Rose is and, with the same sardonic look in his eye as he had when he said, “Good heavens, Mrs. Meade, remember yourself!” gets Esther to take the bad card instead. (It’s a bad card. It’s a funny sequence, but it is a bad card.) And Alonzo Smith, an overworked attorney and ineffectual family dictator, has the opposite problem from Grandpa’s. Our first interaction with him makes him seem like he might be the only sour grape in a family of melon balls; he singlehandedly manages to ruin Rose’s solitary phone call by insisting on taking a bath before dinner, thus moving it back to 6:30, and then blundering his way through dinner – of course he does, because no one lets him in on Rose’s secret until it’s too late. It turns out, alas, that he is little more than the average clueless dad with a bigger heart than he means to let on. Most of his choices, from taking a position in New York to deciding not to take it because his youngest daughter becomes a Christmas Jacobin in front of his eyes, are not motivated by anything more than the stereotype of the deadbeat dad. Tootie (Margaret O’Brien), a five-year-old, exists to steal Esther’s show, and often enough she does just that in the most jaw-dropping way possible. Here’s a list of things which she does, occasionally assisted by her slightly older sister, Agnes (Joan Carroll), which I can’t unsee.

Tootie exists in this dizzying netherworld, living as the strange combination of a birth control ad and runaway from The Little Rascals. One minute she’s smiling and doing a genuinely cute little song-and-dance with Esther; the next she’s shouting “I hate you!” at a harmless neighbor and throwing flour into his face.

The characters aren’t brilliant, and the songs didn’t move me, and the writing was fine, and Tootie was the inspiration for The Omen. And yet the movie still attracted me; I blame the color blue. See the photo up top, when the family sees the World’s Fair lit up at night. See the photo below as well, in a scene where the characters on screen are just as blue as their surroundings. Drake’s jacket is the deepest navy blue, contrasted with the yellowy curtains behind him; Garland’s light blue dress is fetching and played off by her hair, which she describes as “auburn” in the film and I sure wouldn’t. It’s interspersed with that lovely winter’s night blue outside, which is such a moving color and so lovingly, fully rendered here. Like other Technicolor contemporaries from the first, lovely age of the technique, Meet Me in St. Louis is colorful and animated and bright, jewel-toned and gay. But in its arresting blues it finds the cool counter to its whiz-bang pastels, and in those moments – when John tells Esther he cannot come to the party, when the lights come on at the World’s Fair – the movie sings.