The real tension, the real horror in The Witch isn’t in the story. This is not a scary movie, despite the genre it belongs to on Netflix or at your local video store (as if!). The tension comes from wondering when Eggers is going to pull the trigger. Surely he must break from the old, stale setup of his picture and start to deconstruct the narrative, but the question is when? On and on, The Witch presents the binary which pervades an incredible amount of our Western perception: women and nature go together, and nature is inferior to masculine technology in both virtue and reason. The woods of The Witch are threatening and dark, difficult to navigate and unmapped by these settlers. There are women in these woods, we know that much. We are shown one old woman, and another, young and beautiful, seduces young Caleb (Harvey Scrimshaw). Eventually he wanders home completely naked, and in his final minutes he writhes and screams like someone in one of those exorcism movies. He ultimately manages to expel something which has traveled from his belly to his mouth: an apple. I’m not sure symbolism can get more blunt.

In short, this is the old way. This is how your grandfather and his (insert several greats) grandfather considered the intersection of magic, nature, women, and evil. It is spoken to by Arthur Miller in his introduction to The Crucible:

The edge of the wilderness was close by. The American continent stretched endlessly west, and it was full of mystery for them. It stood, dark and threatening, over their shoulders night and day, for out of it Indian tribes marauded from time to time, and Reverend Parris had parishioners who had lost relatives to these heathen.

The parochial snobbery of these people was partly responsible for their failure to convert the Indians. Probably they also pre-ferred to take land from heathens rather than from fellow Christians. At any rate, very few Indians were converted, and the Salem folk believed that the virgin forest was the Devil’s last preserve, his home base and the citadel of his final stand. To the best of their knowledge the American forest was the last place on earth that was not paying homage to God.

These American forests are the province of women, not of men, and the forests are defended against the encroachments made upon it by men. A male infant is killed and turned into some concoction for the witches; Caleb’s mishap we know; William (Ineson) went in with Caleb earlier, found a rabbit to shoot down, and then nearly shot his eye out as the rabbit defiantly stared him down. (It’s a rabbit we later see on the farm, consorting with the other animals.) And it is certain that in contrast to these deeply religious people, arguably the last people on this continent who knew what it meant to believe in God, that forest is in rebellion against Jehovah. It’s all done quite well, certainly, but on the whole it still feels disappointing; watching the movie one can feel it ready to take the next step but refusing to do it. 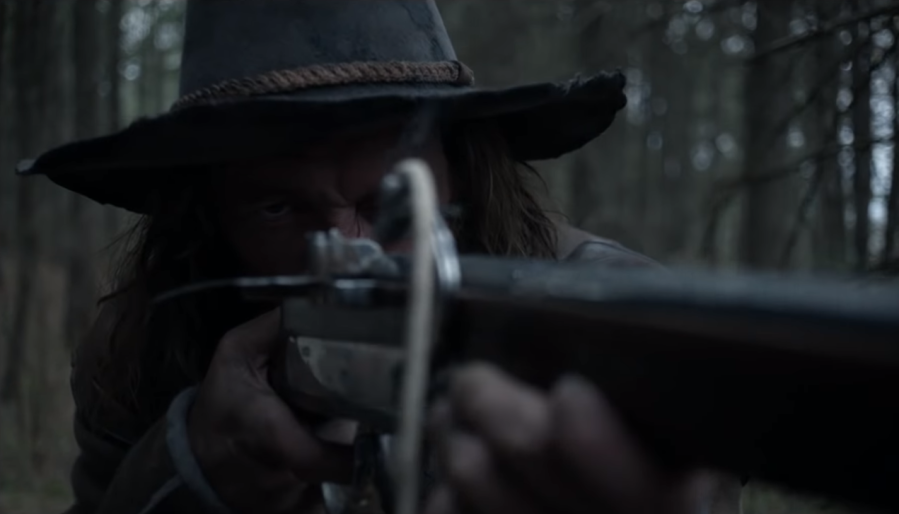 Then Eggers finally pulls the trigger, later than I expected but still powerfully enough to start the cheering. In the early parts of the film, William is certain that he and his family can carve out a place for themselves in what might genuinely be called wilderness. The film begins with his proud acceptance of a sentence of banishment from the authorities. (The smirk he makes when he receives the sentence says it all. Ineson has a tremendous voice, and every few syllables you’ll the crushing of stones in his speech, but his face is plenty expressive on its own merits.) He takes his family to this lonely place, sure of his ability to guide them safely through the manifold dangers of this solitary, isolated life. It goes wrong. Two children die. The other three are at each other’s throats, and it is impossible to tell which among them, if any, if all, is given over to Satan; not to invoke The Crucible too often, but it’s always fascinating how bad the truly pious are at figuring out which people may actually be consorting with Satan. His wife, Kate (Dickie), is driven further and further into a grieving madness. She pleads with him to take the family back, to swallow his pride and beg forgiveness of the theocracy. In those scenes, William is as much like Jack Torrance as he is any other movie character I’ve ever come across. The Witch is subtler in characterizing its slipping father; it is not the insanity of a haunted place which tempts him and sneaks into the crannies of his mental illness, but the insanity of pride, of total male dominance. William does what Jack never can. He cries out to God:

Oh my God, I am false. I have infected with the filth of pride, I know it. I am. Dispose of me as thou wilt, yet redeem my children. They cannot tame their natural evils. I lie before thee a coward, and thine enemy, and I lick the dust of the earth. I beg thee, save my children.

Eggers’ bullet is fired cleanly, quite unlike William’s pre-hasenpfeffer potshot, and the movie’s deconstruction finally begins. For as much as the forest may be dangerous, probably even evil, it’s his fault that the family is there. For as irrational as Kate has become in these few days of loss, it is he who truly began her wanting and accounting when he stole her inherited silver cup and traded it for supplies, letting her wonder where the cup has disappeared to, letting her wonder which of her children may have absconded with it. Even if Thomasin (Taylor-Joy) ultimately does some unspeakable things by the end of the picture, it was her father who doubted her averrals that she was no witch. There’s a reason they are called the sins of the fathers: William, as likable as he is and as decent as he wants to be, is a failure, and it is his failure which allows his family to be destroyed. I’ll stop quoting The Crucible after this, I promise, but William’s idolatry of his own seeming wisdom is no small fault. “Theology, sir, is a fortress; no crack in a fortress may be accounted small.”

Movies which are better ideas than movies are two for a penny, but The Witch, for all the joy it takes in investing in its ideas, is not just a photographed synopsis. Eggers has an eye for potent images. He knows well how to make this little farm feel tremendously alone even though its place in the clearing is not particularly scary on its own. He puts the camera low for little people wandering about; he places the camera above Ineson as he goes out to relieve his stress by chopping up yet another heap of firewood. He knows how a little blood in the right place—a squirt of it from a goat’s udder into the milk pail, a stain on Kate’s shirt where a raven has picked at her breast while she dreamed it was her little Sam—can be enough to give us a jolt.

Eggers falls back on old horror movie tropes now and again, being especially fond of letting us linger on an actor’s face, watch them screw up said face into some expression of dismay or fear, and then finally reveal whatever it is they’re looking at. Anya Taylor-Joy is the center of a number of these shots, but the one that really stands out is at the end, where that still camera stays still longer than we expect and holds on Taylor-Joy over minutes. By now the last of the family, she speaks to the goat, Black Phillip, who her twin siblings (Lucas Dawson and Ellie Grainger) have sung songs about and claimed to be able to communicate with. It is a lengthy shot, as shrouded in darkness and lit dimly as so much of the rest of the movie is; Jarin Blaschke’s photography is the miasma of late autumn, the weakness of the sun and the enormity of the long night. We can see Taylor-Joy’s face, and then, without a motion from the camera, we get a response. What dost thou want? It goes on; Phillip appears behind her, not suddenly, and he has the body of a man and a face which stays just far enough out of the light that we could not put a countenance to Satan. This is an exceptional twist on that horror shot; we may well expect some terrifying, unnatural reaction, but the movie refuses to give that reaction to us at this all-important moment; the horror is not going to come from what Thomasin sees, but what Thomasin does.