The gentle young man who loses the mother who protected him and raised him is a common enough trope, but what makes Bambi and Baby stand out is that they have the dumbest names of anyone who fits this particular description. In all seriousness, Bambi and Baby Driver are not so unlike one another; they represent different strands of a certain myth about the orphan forced to grow up in a dangerous, perhaps even nefarious society. Bambi grows up the son of the Prince of the Forest (Fred Shields), living a simple life of exploration and pleasure, surrounded by colorful friends and nurtured by his saintly mother (Winslowe). Like Baby, who goes to enormous lengths to protect his girlfriend, Debora (James), Bambi must fight for Faline, and in both cases the conflict requires guile and savagery beyond what we might have expected from such kindhearted lads. Call it chivalry, call it puberty, call it self-preservation.

The 1940s, one of the great filmmaking decades in this country, is not noted particularly for its beauty. There certainly are beautiful movies in the ’40s, but most of the highlights are brainy or sexy or difficult before they are beautiful. The predominant style was noir, a word which translates literally as “black,” and the black-and-white pictures dominated the decade. Bambi is sandwiched between movies like Citizen Kane and The Maltese Falcon on one side and movies like Casablanca and Shadow of a Doubt on the other. Horror, despair, headlines, and desperation fill those movies with grit and cynicism. Somehow, Bambi exists in the middle, a film which above all else is sublimely beautiful. Sometimes that beauty is as gray as any moment from Citizen Kane: 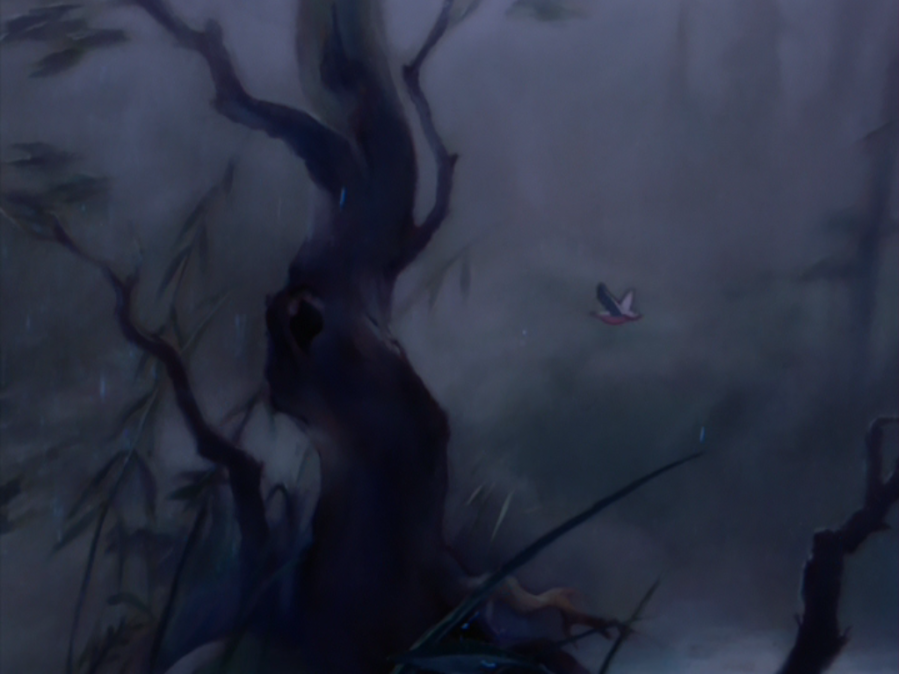 Yet it is not the gray light of Charles Foster Kane’s final happy moments in the snow, or the gray mist that falls upon Rick and Ilsa on their hill of beans, but a sudden storm that sneaks onto Bambi’s nose and falls on all the forest creatures alike. An opportunistic scurries under multiple coverings before ultimately choosing a little nest of grass. A partridge scurries alone with her young underneath her; a doofy chick in a nest high above feels a single drop and decides to take cover under his mother. (The ducks, of course, have a grand old time.) The river runs, the lightning crashes, and all of it occurs in muted green-gray tones only sometimes upended by the white light of thunderbolts.

Winter is a similar off-white, although the standout color in that season is pale blue, which in turn inflects the snowbanks. There is something rather grisly about the snow, unnaturally colored the way it is. Bambi’s mother will meet her end not long after this scene where Bambi accidentally splays himself out on the ice, and in the blue-gray of the snow behind him we can imagine the blue-gray colors of death. Then there’s the unforgettable shot where Bambi, calling out for his mother while the snow falls around him, turns to black-and-white, in 1942 the colors of realism. (In 2017, black-and-white is for fantasy. Baby Driver uses that perpetually unconvincing black-and-white of digital photography, amplified by the heightened contrast, to imagine a time when Debora and Baby will live in peace together, beyond the reach of the cops or of Doc.) Death is, in this happy little woodland enclave where the carnivores gather in equal state with the herbivores to fete the Woodland Prince, a nearly hyperreal experience, and we experience it with Bambi through the double vision of realist photography mixed with that which stands in total contrast to what has come before.

Later in the film, Bambi opts for a stylized expressionism as two weighty shadows plunge into one another, outlined in lightning and backed by unnatural colors. The colors change around them, but the bodies retain the thick blackness which plays interference with the total clarity of the fight.

This is where Bambi and Baby Driver lean most fully into the old plots about men fighting for women, of how they are forced to prove their love with their lives. The characters of Baby Driver are not very strong as individuals, but the film creates a Gordian knot for Baby when it becomes clear to the other members of the group that he intends to bail on the job and, more importantly, that they know how to hurt him. Joseph (CJ Jones) is such a target, and it is only through some remarkable act of mercy that he survives. The other is Debora, who becomes the tit-for-tat object of Buddy’s (Jon Hamm) vengeance after Darling (Elza Gonzalez) is killed trying to ward off the cops. What makes the last half-hour of Baby Driver harrowing is not just Buddy’s video game insistence on returning again and again, but the fact that every time he does return he threatens Debora anew. In neither movie does the fact that the woman needs her young man’s protection seem tremendously regressive. Bambi has just enough biology to cast his fight against a suitor for Faline as someone with antlers coming to the defense of someone who doesn’t have them. Baby Driver is full of people with particular skills that average folk don’t have; it is hardly Debora’s fault that she lacks the getaway driving cred that Baby has, or that she lacks Buddy’s easy way with guns. Having those skills may be cool, but the film recognizes the personal price one pays in order to gain them.

In moments of self-reflection, the hearts of both boys are revealed. For Bambi, looking at himself in a pool, the sight is another entry in a catalog of wonder: who looks back at me, and if it’s me, then how can I be in two places at once? Even though the film spends plenty of time with Bambi as a young adult and ultimately leaves us with the sight of a distant buck next to the previously seen Prince of the Forest, the movie as a whole is most concerned with Bambi as a child. The halfway-to-Lacanian image is further complicated by Faline, who pops her head into the top of the frame and, as those pesky women seem determined to do, punctures the navel-gazing mystery of Bambi’s boyhood. Baby, on the other hand, is older and has just enough experience to prize his own liberty. Now that his indentured servitude to Doc has been paid up, he believes himself free, and in the junkyard where a car has had to be squashed he pops on “I’m Easy” and swings around the junkyard. It’s one of the few songs in the film which does not lend itself to the music video editing where downbeats punctuate actions on the screen. When he waits for others to complete a robbery, he bounces back and forth to the rhythm of the windshield wipers. When he walks down the street to pick up a coffee order, the words of the songs he’s listening to appear on the sidewalk or the surrounding walls. But with “I’m Easy,” he sways and moves freely. It’s a dance, not a regimen.

History will remember Baby Driver for its editing one way or another, I suppose. Whether one thinks of its intrusive, bouncy editing as positive or negative is up to the individual; I’m of the opinion that finds this sort of action more balletic than canned, that we should reward the non-traditional musical for its audacity wherever we can find it, and that I’ve already watched Edgar Wright’s movies do much the same things at about 85% of the zippiness and enjoyed those. Even if one doesn’t much care for those elements of the picture, it’s hard to deny the technical skill that goes into creating them. Those choices are also at the heart of an understandable and enjoyable movie about car chases that feels just barely on the edge of possible without ever spinning over. (I know I didn’t need Baby to outrun a submarine for the movie to be interesting, and I also know that if you have to call something a family over and over again, it’s possible they may just be business associates.)

In the past few years, Atlanta has become one of the most important Hollywood outposts in the world thanks to some extremely friendly tax breaks. What really stands out to me about Baby Driver is that it fully leans into the Atlanta setting. Where many filmmakers will go to Philadelphia and pretend it’s New York, the London-born Wright decided to make Atlanta shine through. Octane has three locations in Atlanta and is something of an institution for coffee snobs. Wright films frequently in South Downtown, which not only has enough wide streets for him to work with, but which is not overcrowded with people. It’s a part of town made almost entirely of grim government buildings, vacant storefronts, and all the parking lots you’ll never use. Frequent mentions are made of the highways which the city needs to function and which everyone with an hour of the city hates. It’s also a diverse city, which is reflected in the rainbow cast. Jamie Foxx steals his scenes with bravado, and CJ Jones steals his with pathos. Doc’s little army of contract robbers and killers is made up of people from various ethnic and racial backgrounds. And Debora, with that milkshake-thick Southern accent, is representative of the country that’s only just outside of the city itself. Baby Driver blends in its people and place seemingly without effort. Even if the personalities came right out of central casting, the location has enough juice to make up for any generic type.