The first ninety minutes of Fanny and Alexander are among the most moving ninety minutes in Ingmar Bergman’s entire oeuvre, which sounds impossible because they are, by and large, intensely joyful. No one describes Christmas at Grandmother Ekdahl’s (Gunn Wallgren) as anything other than “joyful,” and it’s true that “happy” or “gleeful” doesn’t quite cut it. Nor are they this pure bliss all the way through. On two separate occasions, Oscar gives us reason to fear for him, first during a surprisingly morose speech after a Christmas pageant and second when he must leave the line of people singing “Nu ar det jul igen” to wipe his brow. Gustav Adolf (Kulle) bids farewell to one maid he’s been shtupping and begins his pursuit of Maj (Pernilla August), who is receptive to his lovemaking but whose blasé response to Gusten’s offer of a cafe runs him out of her chambers. The third Ekdahl son, Carl (Borje Ahlstedt), thoroughly drunk, deeply in debt and a seeming failure compared to his charming and successful brothers, tears into his helpless German wife, Lydia (Christina Schollin). Granny and her old friend, Isak (Erland Josephson) have a frank, one-sided conversation about the state of the family. (Isak, it must be said, is a little sleepy.) She considers the “oversexed” nature of Gustav Adolf in particular, remembering that his father was much the same way; she thinks about the discreet affairs that Emelie (Froling) has had, even though she knows that she and Oscar adore each other. There’s a pragmatism which is entirely cool in her observations of her sons and daughters-in-law and the mild scandals they live in, a non-judgmental tack which applies to everyone but the perpetually broke Carl. Maybe “joyful” is the wrong word, then, but it’s impossible not to account for Alexander’s (Guve) view of the world in these scenes. He has one of those magic lanterns which so appeal to Bergman, placing sacred scenes on the wall and momentarily enrapturing his sister and his cousins. The dinner is sumptuous, the table enormous enough to seat the family, their guests, and their servants all alike. Alexander’s father stands to give an ode to porridge, which delights Alexander and the whole table besides. His grandmother’s house is a maze of beautifully colored rooms and art that comes to life underneath his gaze; in the nursery, his theatrical father proclaims, lies the most valuable chair in the history of the world. The world outside the house holds its own great magic. In the gloaming of dawn, or something like it, Alexander and his family travel by sleigh to church, holding candles and torches and lighting the soft gray world, silent but for the sounds of church bells, in bright punctures of warmth.  Alexander’s face is a picture of wonder, given to a pleasant awe that it never wears again. The rest of the film, lasting a little less than four hours, is filled with sadness and enough disappointment to drown our preteen protagonists and their mother. The end of the movie is defined by an endless outpouring of Gustav Adolf’s immense happiness at having his family together again, punctuated with an enormous family photo and a statement of infinite possibility from Strindberg via Granny Ekdahl. But the only part of the movie that makes me want to cry is this first act. Bergman’s monologues are among my favorite elements of his work, and there are dozens of good ones to choose from for just about every occasion. (Tag yourself. I’m Ingrid Thulin’s letter in Winter Light.) Fanny and Alexander certainly has its fair share, including some Shakespeare of varying qualities. Edwall plays the elder Hamlet in an accidentally campy version of that play, which will dapple the events of Fanny and Alexander without overshadowing them; Gunnar Bjornstrand, unpredictably cast as the Fool in Twelfth Night, sings the closing song. The best of them is probably in the early goings of this movie, in the aforesaid chair sequence. Sent into the nursery by his wife to quiet the suddenly rowdy children, Oscar does something quite different. It may not look like the most valuable chair in the world, Oscar tells the children, who are instantly rapt by the completeness of his performance, which naturally is missing from his stage work. But this belonged, once, to the Queen of China. It was buried in a tomb and was only recently retrieved by thieves. Edwall throws himself at Oscar throwing at himself at the pleasant histrionics of the playacting, down to the blanket he wraps around his body and the supposedly feminine screeches he unleashes. This is a memory in the making, one of those moments you can stop in the middle of to remind yourself that you’ll remember it forever. It sounds, I guess, sort of like a more advanced version of “Christmas Shoes,” though the sheer outstripping of simple sentiment is part of what makes those Christmas scenes so indelible. They are warm without a single hint of exploitation or heaviness. No one gazes blearily and cries that this is the meaning of Christmas or family; the movie has merely placed a boy’s adulation of his father in the wee hours of Christmas morning.

Allan Edwall’s Danjel in The Emigrants speaks one of the most powerful lines I’ve ever heard after illness claims his infant daughter. I thank you, God, Danjel says, for you have removed the one I idolized and which kept me from you. In Fanny and Alexander, Oscar is the idolized one, taken away from his family. Emilie yowls and screeches like a demoniac, pacing back and forth in front of her husband’s corpse. After the fact, Alexander and Fanny (Pernilla Alwin) are more composed—Fanny is even fairly self-possessed as she watches her father die—but Alexander is totally inconsolable. He has to be dragged to his father’s deathbed, dragged out from underneath that bed, dragged to say goodbye to dying father, who opens his eyes for his son despite the agony of the light. Oscar’s death is the beginning of the movie, the chance for the smooth-talking Bishop Vergerus (Jan Malmsjo) to enter the picture and woo the beautiful bereaved. (There is, in Bergman, an unsavory Vergerus for every occasion; one wonders who the original model was. My money is on some Uppsala hooligan who TP’d Ingmar’s lawn. One is a little disappointed, too, that only Jarl Kulle takes advantage of the menace in drawing out those three syllables.) Unsurprisingly, it is also where God begins to creep into the movie, although the movie from the first moment of Vergerus’ thrall knows that God is not present in the churchman’s urbane, savage persona. At least, there is no god in there who does not agree with every scrap and tittle of Vergerus’ doings.  As he comes into the Ekdahl house, he checks his hair in the mirror; obsessed with the flesh either for its pleasure or its mortification, he is one of those implacable monsters which inhabits any fairy tale. He keeps a monster in the house, his obese, diseased, and wordless aunt. His flunkies are a pliant mother and a strident sister, coupled with a traitorous servant, Justina (Harriet Andersson) who entraps Alexander into speaking ill of his stepfather. (Curiously, Justina has bleeding palms reminiscent of stigmata but also of that Thulin monologue I mentioned up there somewhere.) Vergerus’ God is one of rigor and austerity, discipline and punishment; indeed, one can see in the conversation Vergerus has with his willful but badly hurt stepson the influence of Foucault. The offense has been done to the sovereign, i.e. the bishop, and the offense to the sovereign’s law must be repaid lawfully with the blood of the offender. He gives Alexander a choice: ten strokes of the cane, doses of castor oil, or hours in a closet. The children are not fooled by his statement that he beats Alexander because of his love for him, although it’s true that his conduct with his stepson is more brutal than malicious. The movie leaves open the possibility that Edvard has some positive feeling for the Ekdahls in his care, but cannot express it in any way that would benefit them. He seems to appreciate, in a rough way, Alexander’s hard words toward him; he handles Alexander’s head roughly with his hand, like he got a D- in “mussing a child’s hair” at seminary, and seems kindly disposed towards the boy whenever he isn’t in the same room. He is far gentler with Fanny than anyone else. His possessiveness of Emilie is essentially imprisonment coerced by the fact that the law could deprive her of her children should she divorce him. The movie leaves open the possibility that the bishop has been broken by the surprising deaths of his wife and two daughters some years ago—the ghosts of the latter appear to a terrified Alexander while he is marooned in the attic, baring his bleeding buttocks and utterly defenseless in the face of the two smiling, sneering ghosts. Yet it never excuses his conduct; he is too in love with his power, too sure of his affected movements, too absolute to believe in any alternative which would distort his will.

Rescued from the bishop’s palace by what must be a miracle, for there can be no other explanation for how they are in two places at once, Fanny and Alexander are kept in the Jacobi household. Alexander meets God in that place, swept away by the mystical story that Isak reads to him and vaguely horrified by the promise of wildness that Ismael (Stina Ekblad) holds in his hands. Earlier, Alexander and Fanny, robed in their bedclothes and sitting on the ledge of their barred bedroom, had tried to wish their stepfather dead in a scene so innocently macabre that it recalled Forbidden Games. Ismael, wrapped around Alexander, brings an overly literal Hell to the bishop’s palace, using a foolishly placed lamp and a heavy dose of sleeping pills to scathe Vergerus with fire. And Aron (Mats Bergman) introduces Alexander to God. Throughout Bergman’s work, God has been uncaring (The Seventh Seal), impotent (The Virgin Spring), terrifying (Through a Glass Darkly), missing (The Silence). Here he is a puppet of man, bursting through a door as a sort of ornate practical joke; Aron teases the frequently envisioned Alexander, creeping around the house and presumably looking for a chamber pot, by making him believe that the God he has denied is in fact here to speak to him. It is a bold statement, maybe even Bergman’s boldest on the subject of God. Yet in the context of his other films, one is more drawn to Emilie’s whispered conversation with Vergerus, where she is on her knees and he is holding her face. I am an actress, she says. I must wear a thousand masks. If Fanny and Alexander is a culmination, and I maintain that it is, then Bergman’s God must be something like that as well, a figure with an unknowable face and a flair for dramatic appearances. 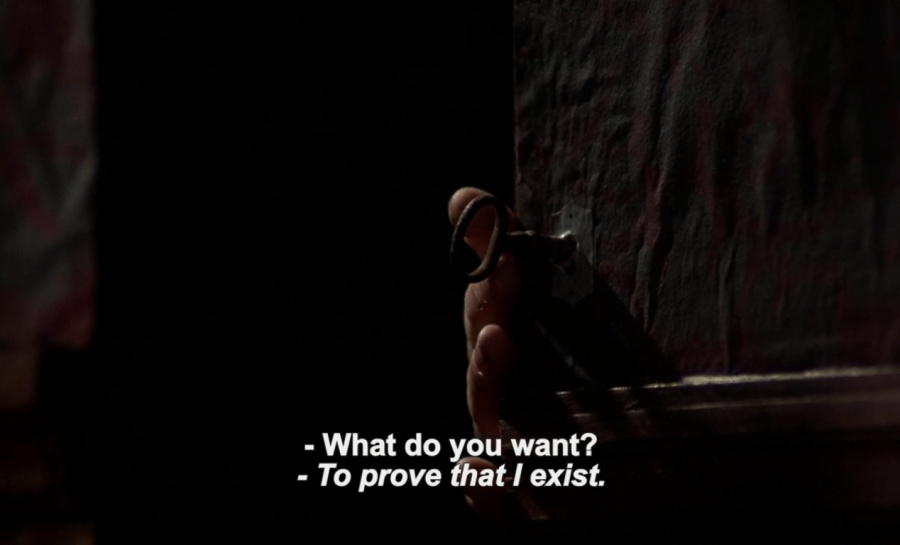