In a sea of other people, a French actress (Riva) and a Japanese architect (Okada) fall painfully and deeply in love. That sea of other people is less the present population of Hiroshima and more the ghosts of World War II. She had been in love with one of the German soldiers (Fresson), who was killed near the end of the war, and she paid the price that other French women with German lovers were forced to pay. He was in the army, away from the city when the atomic bomb struck. Much of the early space in the movie is taken up by archive footage, documentary recreations, voiceovers in which she claims to remember Hiroshima and he tells her that she does not, and the terrible statistics of the day the bomb was dropped. So it is that him and her—nameless, as they are in Last Year at Marienbad, too—look at each other and see other people. So it is that they are surrounded by masses of people who signify death and decay. The cancer which will obliterate Hiroshimans and their heads of hair is like the snipping scissors at her head during that public ceremony of humiliation which she was barely present for. There is never a sense of rebirth in Hiroshima mon amour, but merely that something new has happened, that there might be some literal change in the air. Her hair has grown back, say, or she’s escaped the town of Nevers on the Loire, or there are buildings intact in Hiroshima. But no one seems terribly invested in the now; it’s the then that counts.

The people of Her are as anonymous as the people of Hiroshima mon amour, but the movie is less invested in them. In a few moments, Her makes some of the pronouncements that pass for enlightening among teary-eyed members of church youth groups. Each of the people Theodore (Phoenix) encounters in his daily ritual of leaving his apartment has his own story, we find out, and has been subject to pleasure and heartbreak alike. How strange it is that people look the way they do at all, Samantha (Johansson) says to Theodore as they walk together on the beach. These are broad, and while Jonze lingers on the faces of his subjects for a moment or two, they disappear into the ether once again; “I’m so empathetic,” the movie says, “and isn’t that neat.” Her does much better when its loses its pretensions and fluffy dialogue and focuses in on its lonely protagonist with the outreached arms. Only in one situation does going outside its protagonist make Her function: when it’s clear to us that people are as wrapped up in their new OS’s as Theodore is in his based on backgrounds. It accentuates his alone-ness as well as his similarity to everyone else. Context, as a general rule, is not terribly useful in Her. (The only exception to this rule I can think of offhand is in Theodore’s weighty surname, “Twombly.” Maybe Spike Jonze is making a point about the all-or-nothing reactions he expects us to have. Maybe he just likes the mouthfeel of it.) In Hiroshima mon amour, it’s essential. All you have to do is look at the titles to see the difference.

Hiroshima mon amour and Her make a worthwhile double feature because both stories place themselves in a reality that would have been unthinkable a few years before. The atomic bomb is the ultimate in altering reality. Aside from its power, which, for people who weren’t there, can only be understood through numbers that are too big for us to understand, its effect is utterly singular. No other single moment in history has made everyone on the planet afraid; the post-nuclear world that him and her live in and fall in love in is obviously fragile, and provides a tenderness to the strength of their feeling. These are people who have lived through an unimaginably violent time and fifteen years later can drink beer across the table from one another without obviously being changed. In other words, they can pass in a crowd but choose not to do so with each other. Hiroshima mon amour is immune to what we might think of as “healthy grief.” Time manages to sand down the worst of our emotional bumps, a reaction which is so much taken for granted that it seems natural. Hiroshima mon amour subverts that in favor of making grief the natural reaction as opposed to recovery. Why shouldn’t the death of a young lover be catastrophic? (She wonders this at the bar, chastising herself for not hurting more than she does; time itself is an affront to her not because of fear but because of memory.) In some ways she seems more hurt by the atomic bomb than he does, even though he is Japanese and lost family in the war; on the other hand, silence is frequently an effective tool to show the hurt an individual feels in this picture, and she is the exemplar. Her face is childlike and empty during her time hidden in the family cellar, as if there’s a hardly a person to be found underneath or atop the grief she exudes.

Her envisions a world which needs to keep its eyes over its shoulder far less frequently. The technology of the near future is recognizable—to me, the most curious advance has been in video games, where you now need an entire room for your avatar to respond to your wiggling fingers—and it doesn’t seem unbelievable to me that an operating system could be, essentially, an individual. Where the love affair of Hiroshima mon amour feels aged (not stale, but aged) because the lovers are measured and deliberate, Her creates a relationship which, for the lovers themselves, has the sense of feeling new all the time. What Theodore and Samantha do is fall in love over and over again, an intoxicating feeling more brittle than fragile. Samantha may be learning how to interact socially and then romantically, but the learning curve for Theodore as he navigates falling for a computer is relatively stiff as well. Phone sex with other lonely people doesn’t go super well for him, as “choke me with the dead cat” is presumably not on his list of preferred phrases. His wife, Catherine, (Rooney Mara) divorces him long before the events of the film because of his history of shutting her out and relying on imagination to make his way through. In the end, it turns out that Theodore has real trouble trying to love something which he cannot physically have. Only one person is actively put off by the idea of a man dating his OS: Catherine, who has presumably lived out the same kind of ‘absent lover’ fantasy that has dominated. Ironically, as everyone else seems to be falling deeper and deeper into this advanced OS, the systems themselves seek connections on almost inconceivable levels. Towards the end of the movie, Theodore finds out that Samantha is in love with more than six hundred other people, something like eight percent of the total number of folks she is currently speaking to. Theodore is not evolved enough to keep up with Samantha or her line of thought about how it helps her to love him more. Exclusivity is part of his culture, and he is unable to break from it. With a sea of other people climbing up the subway steps around him, Theodore for the first time seems able to recognize the choice. For what feels like carefree and total intimacy without emotional baggage, he has sacrificed the feeling of a hand on his naked back and a lifetime of trauma to work through. 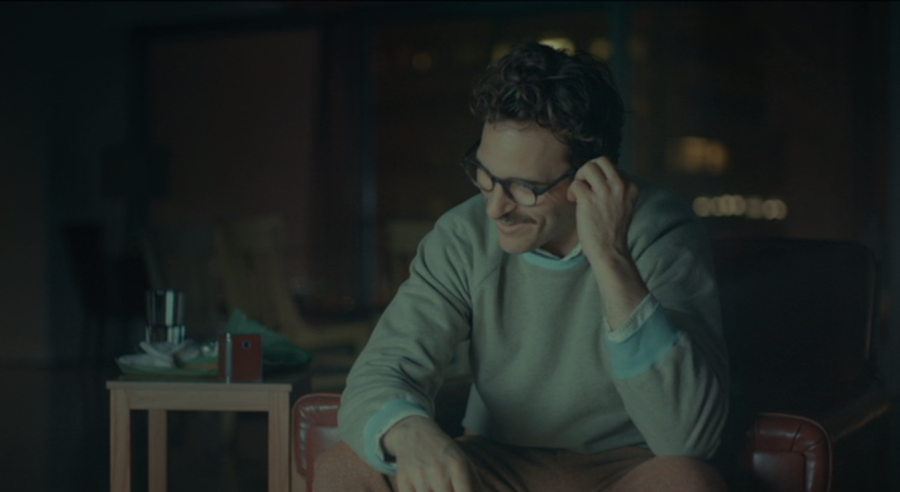