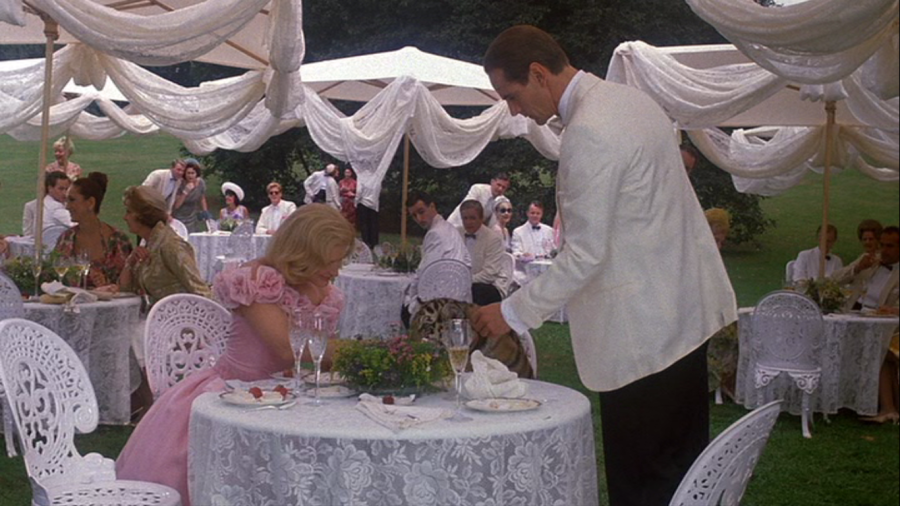 I think if screened Reversal of Fortune for ten other people and then asked them what they thought the film was about, I would get at least seven or eight different answers. Is it about Claus von Bulow (Irons), far and away the most interesting person in the movie? Is it about his potential guilt or innocence? Is it about his emasculation and general dissatisfaction taking vengeance through a perfect crime? Is it about Sunny von Bulow (Close), his catatonic wife who narrates the film? Is it about her profound mental health issues and how her husband fails to help in any meaningful way? Is it about Alan Dershowitz (Silver), Harvard professor and general do-gooder? Is it about how his work on the von Bulow case changes his perspective on being a lawyer, or changes the way he sees the law? Is it about how Dershowitz’s personal life is subsumed by his relentless passion for law? Is it about his team of law students who get a fabulous working education? Is it about the effort that goes into researching a case? Is it like A Cry in the Dark, in which the defendant doesn’t react in the way we expect and so we assume s/he is guilty? That’s more than seven or eight, and I think Reversal of Fortune thinks it’s about all of those things in some equal parts. Unfortunately, this is only a two-hour movie. What we get instead is a portrayal of a mild-mannered potential killer whose crime is too literally and figuratively bloodless to interest us much, a picture of a poor little rich girl all grown up and hooked on drugs, and a lawyer who spends a lot of time making patronizing speeches to Felicity Huffman about what it really means to practice law and be a good lawyer. (Felicity Huffman has had a wonderful career, but she actually says: “Yeah, okay, so someone has to defend Claus. But why you? Why us?” If the screenwriter thinks his audience is so stupid that they need that question to be asked, much less answered, he might have a poster of Aaron Sorkin above his bed.) Watching Reversal of Fortune is like drinking a glass of iced tea after all the ice has melted; you know it should be delicious, but everything, from texture to taste, simply isn’t right.

The acting is mostly fine. Silver has the hardest part because he doesn’t have much to do besides make the odd lawyer joke in between offhand allusions to the Celtics and highfalutin statements about Law. (There’s a line in this movie early on where Dershowitz tells Claus that he’s not a “hired gun” and he doesn’t take cases that aren’t morally or Constutionally meaningful. I laughed, but it’s not the movie’s fault. How was it supposed to know that Dershowitz would be one of the several hired guns on O.J. Simpson’s defense team?) He also has to confront the fact that his perm is acting nearly as much as he is, which, again, I don’t blame him for. Glenn Close is strong as Sunny, although her performance is only given room for three notes: comatose, mostly comatose, and hysterical. Sunny is no more nuanced than Dershowitz in this movie. Her reasons for being utterly miserable are not given a great deal of weight. Certainly she is hurt by the fact that Claus is consistently unfaithful to her, but it seems incredible that she would go into such a tremendous spiral due to a problem that could be addressed by counseling or divorce. The last time she had a cheating husband, she cheated on him in turn and wound up with Claus; even in the past, we see that she’s not some fragile snowflake but someone fully able to swing events in her favor. It’s also not as if the film couldn’t take some time to explore her more thoroughly. After all, she narrates it from her persistent vegetative state, so clearly it’s capable of some dramatic license; one wonders if the movie was too convinced of its own factual basis to play in those murkier, more interesting waters of outright fiction. I don’t know if it would have substantially improved Reversal of Fortune, but there’s no doubt that more character work on Sunny would have given Close, arguably the best actress of the ’80s, more room to spread her wings.

I have a hard time deciding if Jeremy Irons is actually good in this movie. My instinct says yes, and so did the Academy: he won Best Actor for 1990 playing Claus von Bulow. But my instinct is also dangerously distorted by how much I love Jeremy Irons, and there’s no question that the nominated field in 1990 was bleak. I fail to read mystery into his character. He talks too much, and the fact that Dershowitz doesn’t ask Claus to tell him what really happened until the movie is more than halfway done limits our interest in whatever truth Claus may or may not be hiding. Irons’ performance is seriously dependent on his instantly recognizable baritone, frequently reaching down to raspier basso levels. Claus is marvelously dry, but is too much of a gentleman to laugh at his own jokes. At a table full of Chinese food and law students, Claus tells a couple of jokes which would make a prosecutor drool. “What do you get a wife who has everything?” he asks the table. “An injection of insulin.” No one’s quite sure if it’s funny or not, so Claus tries again. “What is another name for ‘fear of insulin?'” he asks. He supplies the answer, an A+ pun: “Claustrophobia.”

Like Charles Ryder from Brideshead Revisited, Claus sees things secondhand. “Why must this be a play?” Julia asks Charles at the fountain. Dershowitz is similarly angry when Claus refers to the onset of Sunny’s second coma as “theatrical.” It certainly was, we find out later, but Dershowitz is wound up by the fact that Claus doesn’t even seem to be upset that his wife is a vegetable in a hospital bed. Claus tries to brush off the criticism – I don’t wear my heart on my sleeve, he says – but there’s a little hint in that statement. He may not wear his heart on his sleeve, but he certainly knows it and likes it when he’s at the center of attention. In those consecutive scenes, at a Chinese restaurant and back in Dershowitz’s living room, Claus is at the head of the table or seated high up in the room’s most luxurious armchair. His posture is perfect; he makes a small show of tapping the tea off the spoon he stirred his sugar with. It’s a role that would have suited George Sanders nicely; Irons’ Claus basks in curious eyeballs like Addison DeWitt or Jack Favell. It’s the same reason that in the movie’s final shots, Claus makes another insulin joke with a stranger who has recognized him from the New York Post. He likes the reaction, pure and simple. But exhibitionism doesn’t, by itself, make Claus particularly engrossing. Dershowitz, by the end of the movie, concludes that Claus’ innocence is a distinct possibility, maybe even likely. (Not everyone else on his legal team is convinced.) If Claus did murder Sunny, or at least let her die, it’s a crime which has lost all of its menace. Irons manages to make murder as safe and boring as doing laundry or sorting out figures and paperwork. Certainly that’s a success in its own unusual way.