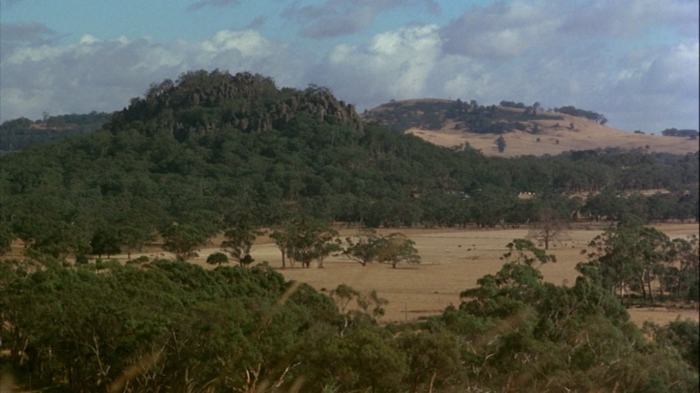 More than forty years later it’s nearly impossible to come to Picnic at Hanging Rock without knowing that you’ll not receive satisfaction from the movie, at least in terms of the plot. That’s not to say that some kind of satisfaction – or at the very least a movie-plausible explanation – was always out of the filmmakers’ reach. Here’s a deleted scene which would have lent a supernatural, and literally chilling, air to the film. (I would advise you to let it alone if you haven’t seen the film and would like the full experience, because the clip does speak to some plot elements which do come as a shock by film’s end.) I love that scene. I am thrilled that it never made its way into the film itself, because nothing would have ruined this movie like an explanation, or even half of one. Picnic at Hanging Rock is the antidote to a strand of moviewatching I’ve decried in the past, in which viewers try to make linear what is divine. This works on some texts – Lost, for example, which was decoded in some cases by the Internet before it could be revealed on television – but it is like cutting apart a tapestry to see what it looks like inside. It would be interesting to know, but the art is already in front of you.

The early scenes at Hanging Rock are yellowy, gauzy, gorgeous; credit must go in no small part to DP Russell Boyd, a frequent Weir collaborator who won an Oscar for his work on Master and Commander, which was marvelous but less affecting than what’s here. In the noontime sunlight everything around the rocks and in the high grass turns shades of goldenrod and buff. The nice Victorian girls in their white dresses appear to be in something colored more like flax or maize, and each one is posed in some pre-Raphaelite position.They lounge on one another, hold their parasols against the late summer sun, read Shakespeare’s sonnets aloud. In this setting, Miranda (Anne-Louise Lambert) creates an effect on the others in her company which is somewhere between “casting a spell” and “beating someone upside the head with a brick.” Classmate Sarah (Nelson) is in love with her in that boarding school way, so enraptured that I thought she was going to end up being mute. The school’s resident classy Frenchwoman, Miss de Poitiers (Morse), breathlessly compares Miranda to the Venus in Botticelli’s painting, though her Miranda is an “angel” as opposed to a goddess. Two young men, a dapper anal retentive Englishman (Dominic Guard) and his well-meaning, earthier Aussie companion (John Jarratt) see Miranda and three of her companions crossing a small stream on the rocks.

Edith (Christine Schuler), overweight and whiny, accidentally gets her shoes wet. Analytical, bespectacled Marion (Jane Vallis) has no real trouble getting over. Bertie, the Aussie, notes that the brunette, Irma (Karen Robson) is certainly very attractive, though for Michael there can be no substitute for Miranda.

She leaves a sprig of flowers on the water, but stands there still, ghostlike in her white, watching something unnamed below her. She goes through thin spaces made thinner by Weir and Boyd, deliberately moving to the next curiosity; Marion and Irma follow her willingly, though Edith does so out of a sense of panic, a fear of being left behind. Edith, the last in, is the first and only one out of the upper levels of the rock.

The girls at Hanging Rock are distinctly ordered; perhaps it’s the Victorianism in them that does it, although I like to think there’s something about the location that imposes itself on the surroundings. Miss McCraw (Vivean Gray) notes that her watch has stopped for the first time ever. Bertie and Michael can’t quite agree one what time it is either, though Bertie’s pretty sure it’s about noon. Everyone, with the known exception of Miss McCraw and possible exception of the young men, is asleep not long after that. The girls walk single-file up the mountain (with the unforgettable, unsettling melody of Bruce Smeaton’s score behind them), and when they arrive at a particularly interesting place, the ones who are to vanish form a triangle.

Later, they’ll make a shape not unlike the facade of Hanging Rock itself as they fall asleep; the disappearing trio still makes a fairly neat triangle.

And then, they will form their faceless single-file line – their neatly tied ribbons undone, shoes tied around their waists, stockings off – as they march off into some unexplained oblivion that either from fear or from instinct, Edith will not walk into.

Much has been made in this movie of sexual repression, the presumed roles of women, the rigorous strictures of Victorianism, the meaning of the rocks themselves. Miss McCraw notes early in the film that the rocks themselves are, geologically speaking, very young: only a million years old. (She speaks over the driver, Hussey, who gamely and Biblically refers to them as only a thousand years old.) Where Miss de Poitiers pages through her book of art and the girls read poetry, Miss McCraw peruses a book full of sophisticated mathematics. In short, the three girls who disappear and the older woman who does the same are each guilty of some transgression. Miss McCraw is too tart, too irreligious. The girls have each displayed their bare legs in the open for anyone to see, and in climbing up this mountain have evinced a waywardness that the less adventurous girls do not share. Later on, Edith – the last person to see Miss McCraw alive – will tell the police that Miss McCraw was only in her “pantalons” at that instant. A maid who helps care for a recuperating Irma will tell her mistress, just as shyly as Edith passed her message to Mademoiselle de Poitiers, that the young lady was found without a corset. (We know they wear corsets. There’s a genuinely funny moment where four girls in a row are tightening each other’s corsets during the opening credits.) The headmistress of the finishing school, Mrs. Appleyard (Roberts), always asks the doctor if her charges are “intact.” It’s not a ridiculous question by any stretch of the imagination, given the bizarre nature of the disappearances and, worse still, the fact that neither Edith nor Irma can recall much of anything about their ordeals. Yet it is a foregrounded one, and especially pointed given the preferred image of the school and the time period in which the story is set.

There’s a through line in Western thought, or at least in Western custom, that connects women to nature to sexuality. The film surrounds its characters with animals great and small. A skink crawls by Miranda as she sleeps. Ants and flies are everywhere, but especially on bare skin. Birds, a spider, and an unexpected koala eye Michael as he pounds his way up the mountainside. When he is rescued from Hanging Rock, visions of a swan – who represents Miranda as an individual, but is also a bird which the Romans associated with her Botticellian other half, Venus – torment him with their frequency and reality. Then, of course, there is the mountain and the surrounding areas themselves, which are stunning but obviously dangerous. Surrounding oneself with such bared sexuality must be inherently dangerous, and it certainly is even for characters who don’t vanish. Check out this gash on Michael’s forehead, which appears suddenly and without apparent cause after he has a vision of the girls’ final moments.

And here’s how Bertie, who goes looking for Michael on Hanging Rock, finds Irma, miraculously still alive, and with the same mysterious and unexplained head wound. 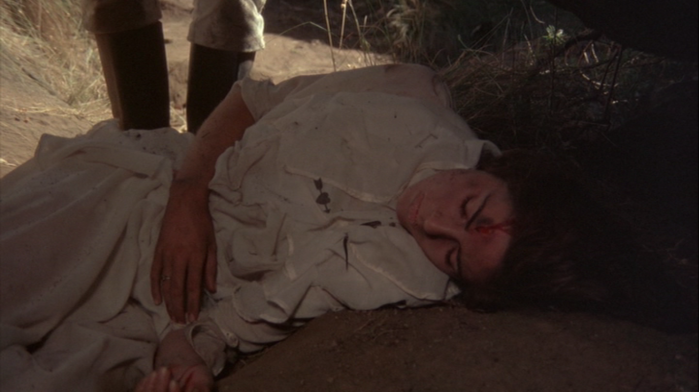 The film ends with two fatalities. One of them is Sara, whose corpse is found in the hothouse; it is left to the viewer to decide if she threw herself, despairing, from her window, or if someone else in the grip of growing wrath and panic defenestrated her. If it is the latter, then the person most likely responsible, Mrs. Appleyard, dies an ironic fate. She too is found dead, presumably having fallen from a place less befitting her: Hanging Rock. This is one of the primary connections between the mountain, which is more chariot of fire than igneous Bates Motel, and the school, which becomes more insidious with every minute spent there. The mountain is shot from virtually every angle, although every character who mounts it, excepting Mrs. Appleyard, sees it from this position at least once:

We must look at it straight up in all of its sinister dark glory, craggy and a little phallic, foreboding and fascinating. Now here’s our last shot of the school:

At first it appears to be civilization itself in VIctoria, with its neat pale bricks and its handsome stairs, its green lawn and its attractive lighting. But the total effect is much the same; by looking up at it, Appleyard Hall is given much the same treatment as the rocks. In a million years, perhaps, some girls will come here on an outing, walk into a classroom, and never be seen again.